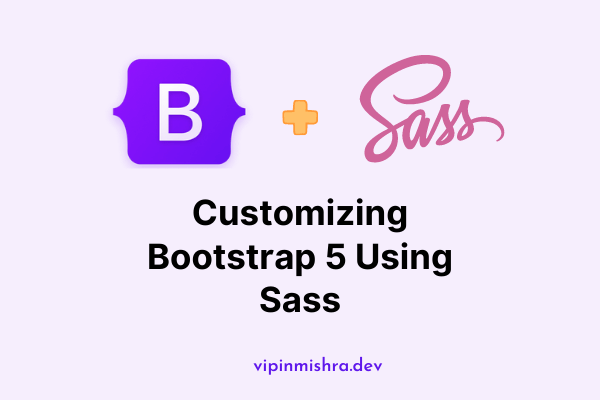 Bootstrap is the most popular CSS Library/Framework to build mobile-first responsive websites with powerful grid system, pre-built components and a good amount of utility classes.

Defaults are Good, But not Always Enough

For most of the time, the default build can get the work done, and it’s all good, but sometimes you need to customize the default values of what Bootstrap provides.

Let’s say you are at your work working on a big project, or maybe you got a project to work on that has different colors than bootstrap, spacing, fonts, etc. and you want bootstrap to get all the work done but with the custom values.

To do this, we need 2 things, the Bootstrap’s Sass source files and the Sass itself to manipulate and compile the source files.

We can download the bootstrap source files from GitHub releases, but we will be doing it through npm to avoid extra work & get future updates very easily.

Let’s see how we can leverage the true power of Bootstrap using Sass.

For this article, the goal would be to customize bootstrap 5 the way so that we can have the following things.

& this should give you a clear idea on how you can get your own customized Bootstrap build in almost no time.

Let’s start. I’ll be doing this on a vanilla html/css/Sass project, but you can do this for any project that has Sass + Bootstrap available.

If you have NodeJS installed, you should have npm available that you can verify using npm -v to get the version of Node Package Manager. Install it from here if you don’t already have it.

I’ve an empty directly named custom-bootstrap & I’ll do a npm init y to initialize a base package.json file that you can ignore for now.

I’m using npm to do this, but you can use yarn or pnpm, whatever you prefer. Open the terminal and run the following command.

If everything goes well, your package.json will now have Sass & bootstrap as a dependency. You will also have a folder named node_modules which have the source for our dependencies.

Now let’s create our source files. We will have 2 files, index.html & bootstrap.scss. Add a very basic boilerplate to your index.html file.

You can hit ! + Tab in a html file to create a basic HTML boilerplate inside VS Code using emmet.

Now that we have our setup done, let’s move on to the good part. Open bootstrap.scss file inside your code editor & paste the below snippet.

Now the path to import can differ with the project & folder structure you have, all we want is the SCSS files from bootstrap that we downloaded through npm.

Here in this bootstrap.scss file, we are importing only the files that are required to achieve our goals that we set before getting started.

This should be enough to compile our custom build with only the parts we have imported. Now, open the package.json file, it should have a test script that we need to customize, or you can also add a new one.

Here we have defined a npm-script with the name of compile css and added a command to compile the bootstrap.scss into bootstrap.css (refer to Sass cli options for more).

Now, open your terminal and run the following command to build the CSS files.

If you’ve done everything as explained above, it should throw a message in console that Compiled bootstrap.scss to bootstrap.css..

Note that we’ve also added the --watch flag to the script so that we don’t have to run the script every time we make any change to our .scss file.

Now let’s customize this build as per our needs. We will be adding following SCSS lines to our Variable overrides section.

That should be enough to get things done. Check your console, you should have your SCSS compiled message. Now, do check the final CSS to confirm the changes.

Bootstrap documentation provides the Sass variables relevant to the component you want to customize, and you can also visit the _variables.scss file on GitHub to see them all at once.

I hope this guide was helpful for you, I think Custom Bootstrap builds are very powerful to achieve custom designs very quickly and in very less time compared to custom CSS or any other time-taking methods.